The NNPCN was created by initiative of Joan Burnett on October 27, 1987.

Click on the title below to watch an interview with three Pioneers of NNPCN, Bev Charron, Donna Giroux and Lynn Duguay, conducted on September 2016.

Near North Palliative Care Network: a Little about our History

Click on the title below to watch a video of the 25th Anniversary of NNPCN and enjoy the charismatic presence of our Founder Joan Burnett. 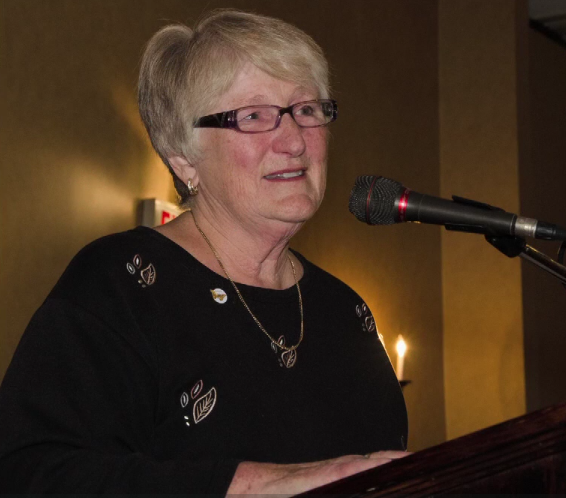 It all started when Ellis New of Powassan made this statement over 25 years ago: “If anyone can learn from what we’re going through, you teach ‘em, girl,” he said. Ellis New had no idea what a force he was unleashing. New was dying and Joan Burnett was caring for him.

“He was like a father figure to me,” Burnett said. “He was a prankster with a big heart and when he found out he was dying with cancer we had no idea where to turn. He wanted to stay home. Between family and friends we organized shifts so that he would have 24 hour care.”

From that experience, and following New’s edict, Burnett and eight other Powassan women formed a palliative care volunteer group, realizing how many other families were struggling and needed support.

“We saw how big a need was out there,” said Burnett. “We were experiencing it every day. We just wanted to help people. We soon realized that there was a gap in the type of support that organizations were offering to terminally ill people. We realized that volunteer support was really important so I approached Canadore College to see if they could offer a course. Canadore looked to Algonquin College and brought in someone to teach an orientation course on palliative care.”

The Powassan palliative care team’s compassion, dedication and caring for not just the terminally ill, but as emotional support to the families of the dying, soon earned them a reputation that brought calls for service from North Bay.

Canadore College had also seen the importance of the palliative care program and had instituted its own course of study with a total of 30 graduates.

In 1987 Burnett brought all of the palliative care volunteer professionals together and the Near North Palliative Care Network was born, with offices in Powassan, Sturgeon Falls and Mattawa.

“It was just so exciting to see it all coming together,” said Burnett, “but nothing was more exciting than the day I had a phone call from June Callwood.”

A year earlier Callwood, a renowned journalist, author and activist, had opened Casey House in Toronto, the first hospice in the world to provide support and palliative care for people with HIV/AIDS, named after her son. Callwood had strong convictions that when a person is dying, they should do so according to their own wishes, surrounded by loving caregivers.

“She spent over an hour on the phone with me, offering advice and options. It was something I’ll never forget,” said Burnett.

As the calls for support increased, Burnett and the other volunteers found themselves working in conjunction with other organizations, including the Red Cross and the Victorian Order of Nurses who soon saw the benefit of having the volunteers providing additional support for their clients.

“It wasn’t long after that I got a call from Queen’s Park,” Burnett recalls. “I was asked to be part of a working group to establish terms of reference for funding additional visiting hospice groups. I was literally dancing as I was on the phone. I couldn’t believe that Queen’s Park knew about us. There were other hospice groups across the province, but we were all very isolated from one another and there was no funding of any kind available to us,” she said. “That was another wonderful, wonderful experience.”

“Near North Palliative Care has a very rich history,” said the organization’s Executive Director André Coterall. “Those first volunteers set the bar high and all of our volunteers have shared their passion, love and compassion for our clients and their entire families.”

The organization celebrated its 25th anniversary with a dinner at the Best Western on Oct. 27, 2012, where Burnett was honoured. Guest speaker for the event was Nipissing University associate professor Dr. Susan Srigley.

“Joan Burnett had a passion for people and a true belief in the cause, in helping people have a good death. She and that original Powassan group saw a need and took it upon themselves to change the world,” Cotterall said. “Joan’s energy and commitment is why this organization is here today.”

Adapted from the article by Laurel J. Campbell http://www.northbaynipissing.com/2012/10/palliative-care-founder-being-honoured/